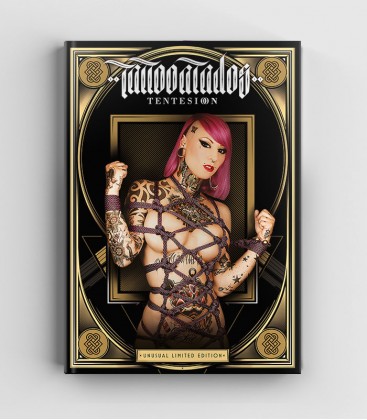 The pictures have been taken during 50 photographic sets with 212 models, mostly spanish but also from countries like Brazil, Colombia, Deutchsland, England, France, Holland, Hungary, Italy, Morocco, Romania, Sweden and Venezuela. As for the riggers, there are 15 professionals from several countries like Argentina, Canada, France, Holland, Italy, Japan, Korea, Portugal, Spain, Sweden and Switzerland.

This art is originary from Japan, and consists in tie to one or several persons under certain esthetic and technic guidelines, generally using ropes made of natural fibers. Its origin goes back to the XVI century as one of the 18th fighting techniques in wich the samurai were instructed: The Hojōjutsu (捕縄術: Restraining a person using cord or rope). This martial art teaches to use ropes to inmobilize, transport or torture prisoners. The bonds follow complex patterns in order to see codificated in the ropes the social class of the prisoner, the commited crime, the punishment that will be inflicted and even his age and profession. The Edo period police itself (centuries XVII-XIX), compound by the low class samurai unemployed, used this techniques with the arrested criminals.

The art of shibari nowadays value another aspects, like the esthetic of the combination between the ropes and the posture, the relationship created among rigger and tied or even the capacity of creating sensations in the human body

In the words of the rigger Josep Lapidario, “The Shibari is first of all an intimate communication among two people”

7 other products in the same category: